How To Use Phrasebox

Here we take a deeper look into Phrasebox - how to set it up, and how it works.

How To Use Phrasebox 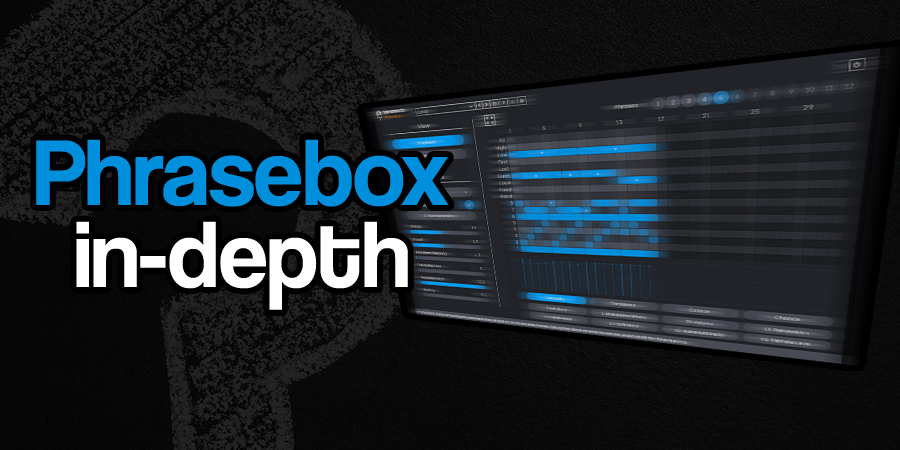 Phrasebox may be a little confusing to get started with if you don't immediately understand how it works. It can be a bit of a strange concept, but once it's grasped it's simple and natural to use.

We have some in-depth videos on the way, but in the meantime, we've dug a little deeper into how Phrasebox works here.

Phrasebox is what we at Venomode call a phrase arpeggiator. It's a cross between a MIDI file player, an arpeggiator, and a re-pitcher. Phrasebox lets you play in a MIDI chord, and it plays back a phrase you have designed on the piano roll, using your notes in place of each row.

It's not like creating a MIDI clip in your DAW - you don't create notes at exact pitches (such as C1 or F#3), but as references to the notes you play in. Playing in different chords will result in the same phrase pattern being played back with different pitches.

Phrasebox works in realtime like an arpeggiator, meaning if you don't play any notes in, you won't get any output. Phrasebox doesn't create audio, it creates a stream of MIDI notes and controller values that you have to route in your DAW.

Routing In Your DAW

Phrasebox takes a MIDI chord you play in, and plays back MIDI notes in realtime. These notes have to be connected to an instrument to be able to hear any sound. The way you have to set up Phrasebox depends entirely on your DAW.

Unfortunately, MIDI plugins are not supported equally well among all DAWs. In Reaper, Logic Pro X, and Bitwig, you can load an instance of Phrasebox in the chain before your instrument, and the notes will be passed directly from Phrasebox to your instrument.

Other DAWs require you to load up 2 separate tracks - the first has a MIDI chord sequence being fed into the Phrasebox plugin, and a second track has an instrument plugin listening to the output of Phrasebox.

You can find some helpful screenshots for common DAWs here.

When you play in a chord, each of the rows 1-8 are automatically mapped to the notes you play, in pitch order. For example, if you play a basic three note chord, the lowest note of the chord is mapped to row 1, the middle note to row 2, and the highest note to note 3. When you play a chord, Phrasebox will play the phrase you have designed in the piano roll, using your notes for each row.

If you change your input chord, then Phrasebox will automatically remap your notes to the phrase. In the next image, you can see we are playing in an F Major chord, using the same Phrasebox phrase. As you can see, the pattern of notes are the same, but the note pitches are the same as what was played in.

You can play in a full chord sequence, and Phrasebox will automatically remap the notes in real time: 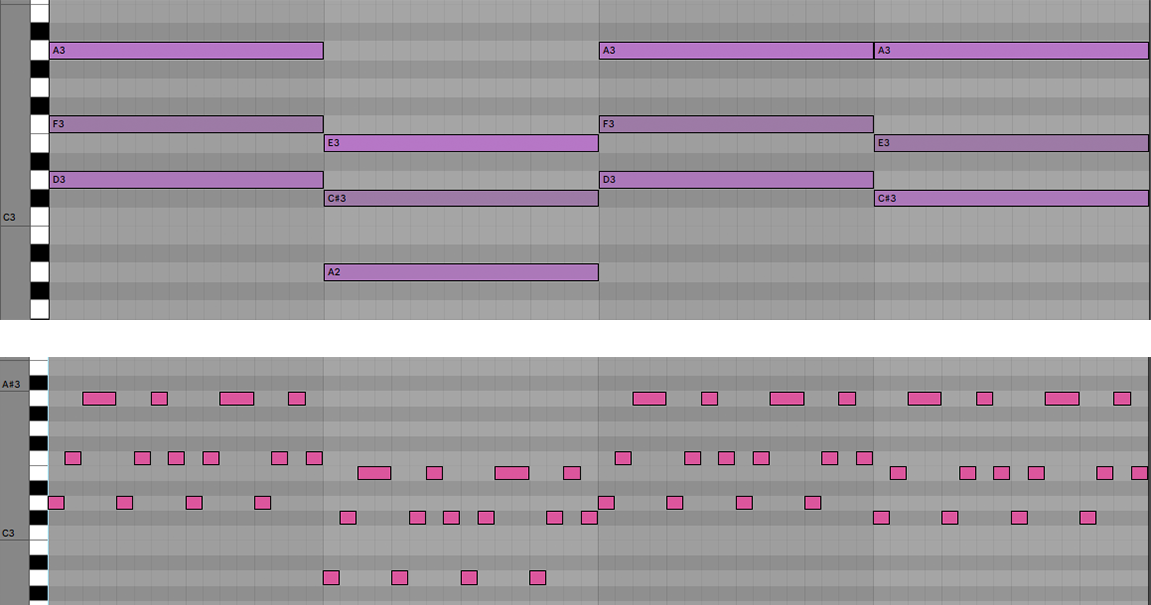 If we change the pattern in Phrasebox's piano roll, you can see the pattern we hear has changed, but still using the notes that were played in.

The examples above have all used 3 note chords, but Phrasebox has up to 8 rows available. What catches many people out is that if you design a phrase in Phrasebox that uses all 8 rows, but only play in a 3 note chord, then some notes won't play at all. This is because rows 4-8 don't have any note associated with them. As you can see in the image below, our phrase uses all 8 rows, but when we play back, we are missing notes on rows 4-8. We've added a red overlay to show notes that don't have any notes assigned.

To be able to hear notes being played on these rows, we need to play in more notes. In the example below, we've added another 5 notes to our chord to make an 8 note scale, and all notes are now being played out of Phrasebox. Phrasebox isn't limited to chords, you can play any number of notes in any combination, including scales.

So far we have only been playing back the exact notes being played into Phrasebox, however we can transpose notes to create more melodic phrases. In the example below, only a single note (C3) is playing, so only row 1 can be used. Transpose values have been applied to 3 of the notes, and the notes have a triangle overly to show which direction they have been transposed. As you can see, those notes have been transposed during playback, even though we are only playing in a single note.

Sign up for our newsletter below. Don't worry, we won't bombard you with spam or pass on your email to anyone else.